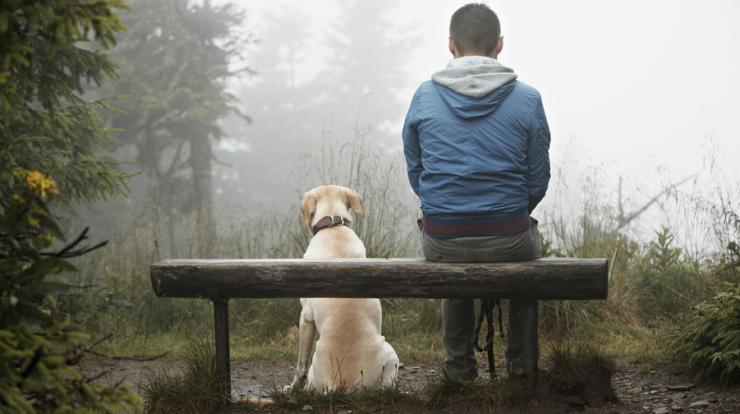 Our mental health depends on a number of factors like the kind of food we eat, the amount of sleep we are getting, the daily dose of exercise we are getting, etc. What if there is a way to obtain good physical and mental well being without following any strict diet or subject ourselves to a Spartan exercise routine.

No, we are not talking about a magical elixir which can grant you a state of great physical and mental well being we are actually talking about man’s best friend Dogs.

Role of pets in your life

Rafeeq has been living in total isolation ever since he lost his job he doesn’t talk with his parents, friends and not even to his lover Zoya, as a result, both his mental and physical appearance took a beating.

Rafeeq used to be a very active person, he used to play tennis with his colleagues from work at the neighborhood club, solve Sudoku in the morning paper all this ended after he lost his job.

Therefore, to get back Rafeeq back to his feet Zoya decided to buy a dog and had it delivered to him.

When Rafeeq got the dog he was totally clueless and asked the delivery man to double check the address when he saw the note from Zoya and gave her a call. When Zoya picked up the phone he was furious with her and wanted her to take back the dog which she refused.

Zoya told him that the dog’s name was Bear, and explained how she is worried about him and wants him to get back to his former self. She told him that what he needs now is a sense of  purpose and asked him to take care of the dog for 2 months and  sent him a link for a popular blog post on “the health benefits of owning a dog”  in a popular pet care service in Dubai’s  website

Initially, Rafeeq didn’t want to engage with the dog he reluctantly took the dog out for a walk one day after Zoya’s persistence. As Rafeeq started to walk along with Bear he started noticing its features. He felt a sense of calmness seeping through his mind as he was walking besides the dog and said to himself maybe having the dog around is not a bad idea and even entertained thoughts about becoming a pet sitter in Dubai till he land’s a new job.

Afterwards, Rafeeq started taking regular walks with his dog and as a result, he began losing his weight, he took the dog to the local club and interacted with other fellow dog owners who gave him some tips on how to better take care of his dog. After Bear came to his life he was able to deal with his problems in a calm and matured manner and as a result he was able to resolve the issues he had with his parents and friends.

It’s been a month long since Rafeeq got Bear since then he life has changed for the better he begins his morning’s by taking his dog out for a walk return’s back take a shower prepares food for him and bear. After he does the morning Sudoku he prepares himself for office.

According to a recent study conducted by pets and people a popular pet care service in Dubai that allows it’s users to find pet sitters in Dubai for their pets.

What the researchers found out was that folks who owned a dog when compared with their non-dog owning counterparts registered a reduced blood pressure, triglyceride and cholesterol levels. We all know what that means fewer chances of suffering from a heart attack.

Like this, there is several health benefits of owning a dog here are some of them.

Less number of visitors to the doctor’s place

You must have come across articles on the big fight against germs through newspaper articles and online blogs of cleaning companies these articles speak of the different types of germs, the disease outbreaks spread by them and how we should get rid of all of these germs.

When our bodies are not exposed to a variety of germs we don’t end up becoming healthier on the contrary the opposite happens the chances of us getting infected will increase. As per studies conducted by a popular health weekly in the US, we should expose our body to a wide variety of germs, so our body can develop resistance against them.

Kids from homes with a dog are more productive and have more attendance than kids who don’t have a canine companion in their house. What can be the reason for this? The answer is just simply the kids from homes having canines have already exposed themselves to a wide variety of allergens in their daily lives.

Microbe a journal on bacterial diseases explains that a mother who has been around dogs during her pregnancy time will pass on 2 bacteria’s Ruminococcus and Oscillospira to their child. The children who are born with these 2 bacteria will have more tolerance to allergies, asthma, obesity, etc.

According to doctors, a person is supposed to get 2 and a half hours of exercise on a weekly basis, according to studies conducted by a maker of a popular fitness app a dog owner on an average gets about 30 min of physical activity on a daily basis another reason why buying a dog can be good for your health.

You will be Happier

Among our friend’s, the ones who own a dog are more cheerful and less broody than others. A person who takes care of a dog will surely take good care of themselves too. Dog owners, in general, are more outgoing and interact with more people, as a result they are imbibed with more positive energy which is one of the many reasons why canine owners are in general are more happy and cheerful.

Throughout this blog you may have come across the various health benefits of owning a dog they can increase the secretion of oxytocin thereby making us happier, reduce our chances of contracting a heart disease what if they can do more.

Hear how Ahmad life was saved by his pet dog “Grover” Ahmad was your average family guy, his family consisted of his wife Farah, his 2 beautiful children Rizwan and Aliya and their pet Labrador Grover. He worked as a security guard at a local bank and led a peaceful and contented life.

One day while playing with Grover the dog started to sniff Ahmad and started barking at him he ignored it as nothing the next day while shaving he noticed a small bulge in his neck then he remembered Grover barking at him the previous day, after constant nagging from Farah he decided to see a doctor who instructed him to undergo a scan to detect any signs of malignancy with the mole.

The test results came and it was positive, the mole was cancerous, however, by the grace of Allah it was in it’s the earliest stage and the doctor assured him that it can be cured with 100 percent assurance and that he should thank god for detecting it at this stage itself.

Ahmad underwent a surgery which was taken care of by the bank he was working for and it’s been 2 months since he has undergone the surgery. He is recovering fast and soon he will be going back to work.

Like Ahmad, there are 100’s of cases where dogs’ were able to detect early signs of cancer in their owners. Dogs have a better sense of smelling than humans according to scientists the sense of smell in dogs in 100,000 times better than in humans helping them to detect signs of cancerous growth with 100 percent accuracy.

Now you must be convinced that getting a dog is not such a bad idea, as it can grant you good physical and mental well being. Also a chance to interact with more people thereby expanding your friend’s circle, what more reason do you need to buy a dog.

Who can take care of your dog in your absence?

There are many pet care services in Dubai however, there aren’t many who can take care of your dog by understanding his or her needs and giving them the love and care they deserve.

That’s where Offermaids comes in .We offer pet care service in Dubai in addition to our cleaning activities we employ the best pet sitters in Dubai, who have been trained to understand the needs of different breeds of dogs therefore, that they can attend to their needs properly.